Warning that this page is heavy on pictures!

In 1998, the world was shocked as the ultra-violent game "Dink Smallwood" was released. At first it cost about $25, and supplied alongside it was a demo version carved out of the final release. However, this wasn't the only demo version ever released. A few months beforehand, in late '97, RTSoft had released a demo that was made from a much earlier pre-release version of the game. As such, it provides a fascinating insight into what the final game may have ended up looking like if everything that was to be implemented ended up coming to fruition. In 2008 I found this rare demo version and have had it on my computer ever since. Let's take a look.

The first amazing part is that after decompressing the installer and finding the game files, it works perfectly in Freedink, suggesting that the data formats were indeed formalised pretty early on and stuck to. Some very good design right there! On the title screen, the only thing that may look different to the average Dink player is the addition of the "Order" button. Unlike the button in the final demo, this one gives you a pre-release price rather than a series of pretty pictures. The other menu option under the button gives you RTSoft's (now disconnected) telephone number for the purposes of ordering. 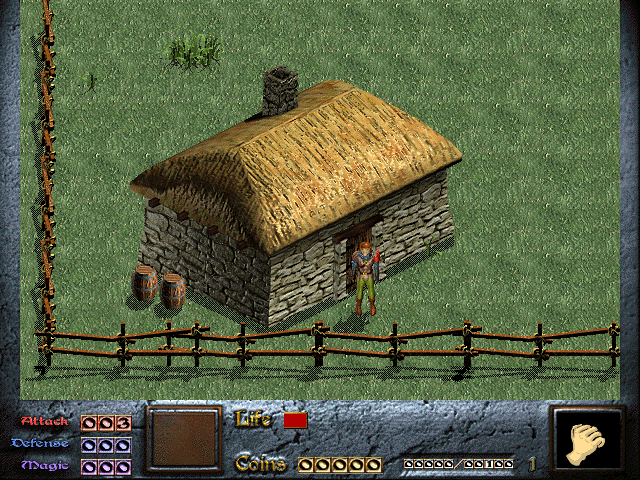 The main difference that you first notice upon starting the game is just how unpolished the map is. Numerous small details that are present in the final release are missing. On top of this, the fences are often misaligned and have funny gaps in them. On top of this, most of the music is missing. 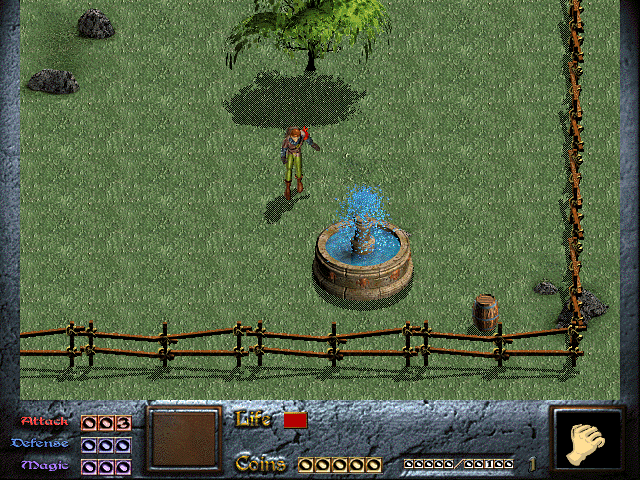 One aspect of Dink that always pissed me off was that you had to pay to heal or otherwise pray you found enough barrels with red hearts etc. Even the gold hearts that increase your maximum health don't actually restore it. In this early demo, there's a fountain in town that restores your health bar. Goodness knows why this was removed in later versions. 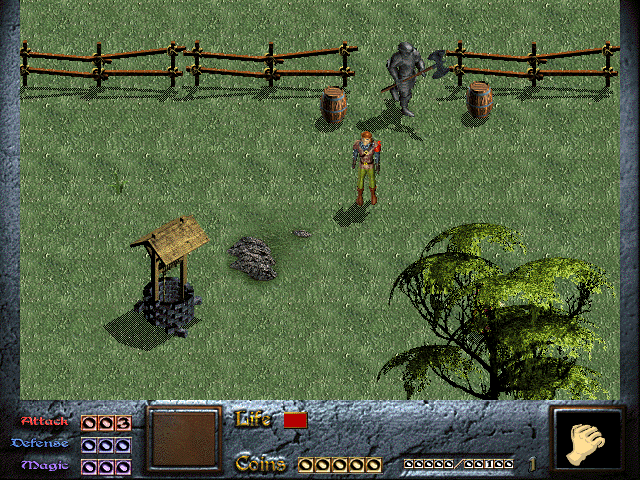 Otherwise, most features from the early versions are intact in the final release. Both Ethel's house and the SmileSteins function exactly the same. The only difference is that SmileStein's house plays NEIGHBOUR.MID when you enter, rather than what it plays in the final release. Weirdly, Neighbour.mid still ends up in the game's files.

The scene with Ethel's duck is a bit different. In this case, the duck suggests that Ethel is crazy. It's a mystery why this was changed in the final release. Maybe mental health groups complained about stigmatisation. 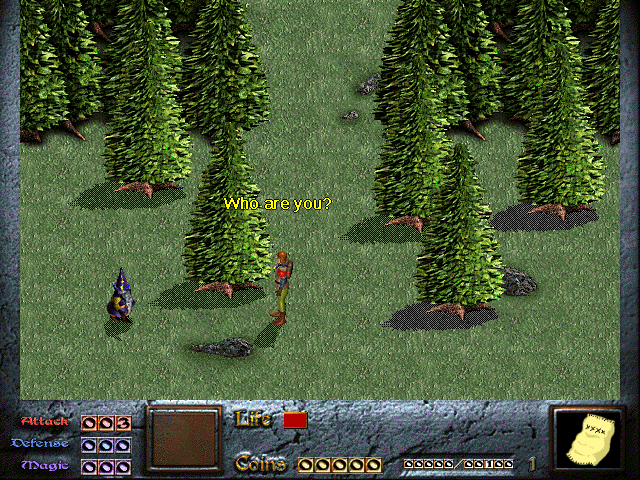 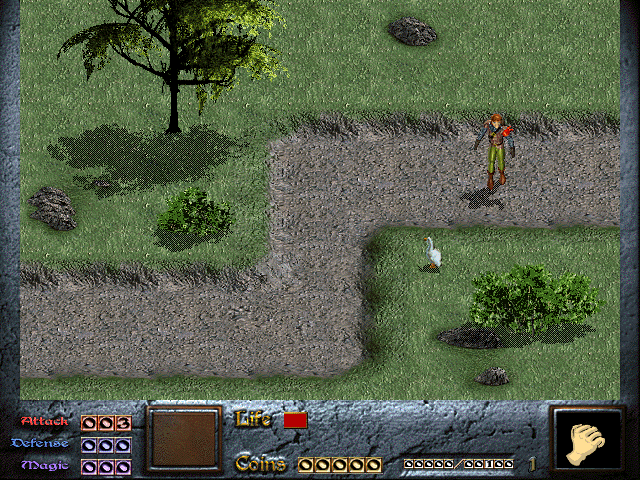 More lack of polish is evident here in regards to the lack of paths that we all know and love. Instead there's that other weird path tile screen that nobody uses. Martridge does the same stuff, although there's an interesting difference from the final version that we'll explore in a bit.

The unhelpful bridge guy is slightly more helpful in this case, as he tells you the telephone number for RTSoft. In the later 1.04 demo, the game operates long past this point.

The AlkTree mechanics are more primitive here, and one must talk to the nuts in order to pick them up rather than walk over them. The nuts also don't feature as an inventory item and cannot be eaten or sold. Note that the Milder cutscene that even triggers after his death is still present here. 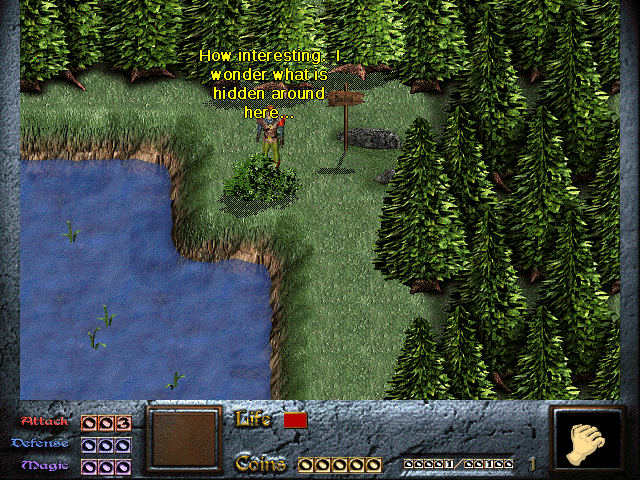 Martridge's house is obscured by two burnable trees. There is no invisible barrier to get to it though prior to the house burning down.

The discussion with Martridge regarding the beast is somewhat different as well. In this case, he mentions that he'd fight the beast instead of Dink but of course that doesn't make any sense since Martridge is already magical and has nothing to gain. 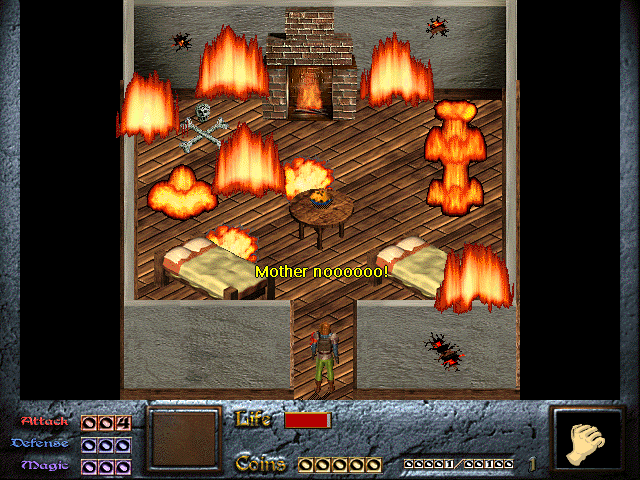 There's no "dead mother" sprite here yet, so a skull and bones are used instead. Of course it doesn't make sense for there to be blood all over the sprite anyway but who cares about details like that?

The letter is very different to what's in the final game. Instead of Aunt Maria, you've got "Aunt Kinney in the NorthLands". Goodness knows what that was originally intended to be. The RTSoft developers often put references to people they knew in the form of in-game characters. Most of the people in KernSin are like that, in particular the cabinet shop family members who are all based upon Seth's real family. This may be another example of that. 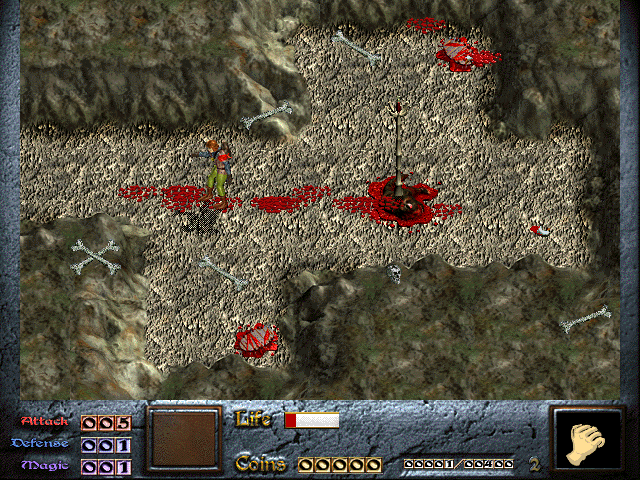 The Bonca fight is exactly the same. The main difference is that when you level up, the stat allocation is automatic and upgrades all stats at once. No choice is presented to the player and the game doesn't stop.

Asking a traveller for news will be somewhat disappointing as you'll find out from him that the big rumours are only in the full game. He'll also disappear when you punch him rather than run away.

Martridge's letter has no gold enclosed. Just Fireball. The problem with this is that you can't cross the bridge meaning the only place you can go that you couldn't before is the Herb Boot Guy's area. 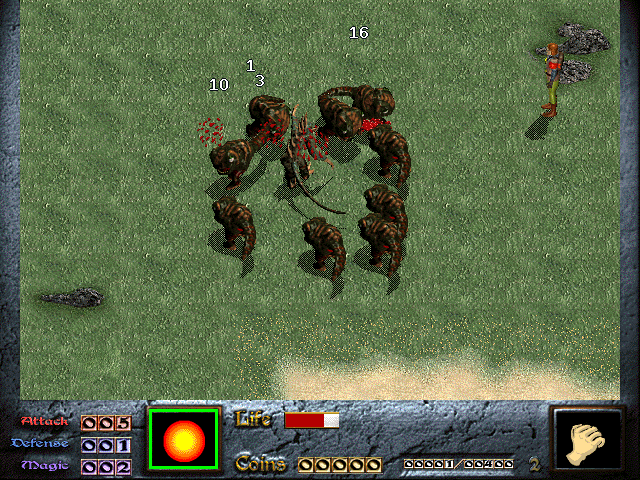 This is really weird. In this area there are a ton of high-powered monsters everywhere. It almost feels like an exercise in testing the map editor, or demonstrating something mildly cool that they may experience more of in the full version. Note that by this point, there's no slayer death graphic and instead it just explodes upon death. 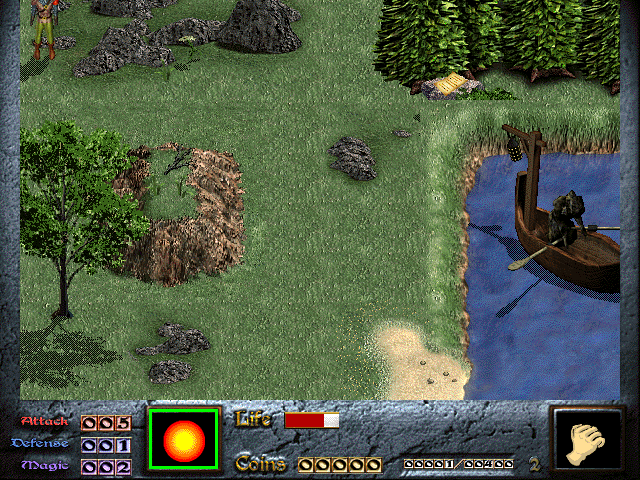 This is the final screen of this demo version. The Grim Reaper is there in his boat for some reason. It's undetermined if death would bring you with him originally, although if he did, Dink was to be a very different game.

There's a letter on a nearby rock which urges you to buy the full version. The game doesn't auto-quit at this point, although the only thing to do after this is attempt to kill all the high-powered monsters. When I was a youngster we'd often try weird stuff like that in demoes so as to get the full extent out of them. If you're a seasoned Dink fan, check out more snippets of Dink 1.01 on the More Dink differences page or otherwise go back to the main page.

This work is licensed under a Creative Commons Attribution 4.0 International License.