If you didn't read the previous article make sure you do so, as it goes through most of the game. This page goes through the other included files and shows you what they are.

The included readme file is worth a read if you want to see the features that were promised to be in the final version but that never arrived. The funniest part is that the special introductory pre-release pricing was only for two weeks after the release of this demo version. Considering most people back then were running on 28.8k lines (56k was shiny and new at that point) it probably took at least two weeks to download it and play it, and in the meantime, the pricing had expired. 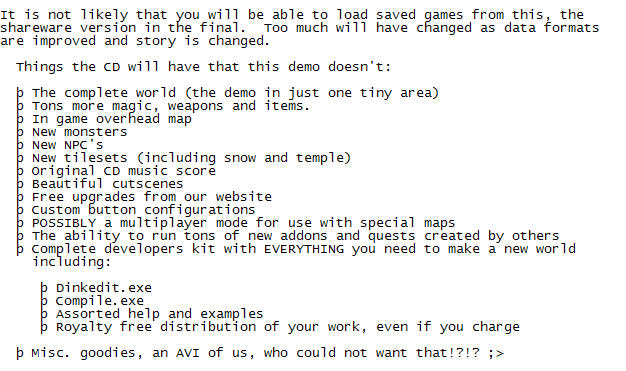 Now let's see, how many of these ended up in the actual game?!

Also of interest are of course the graphics. In the TILES folder you'll find a very interesting picture indeed! It's a complete mystery why this is in here. It doesn't seem to display at any part of the game, and those keys don't seem to do anything. Apart from this, all the tile screens seem to be identical to what's in the final game.

The scripts all seem to be pretty standard fare, and for the most part are identical to the final version of the game. There doesn't appear to be much of anything interesting in the comments either. I'll write this all up later on.

This work is licensed under a Creative Commons Attribution 4.0 International License.